Through times, numerous researches and studies have been undertaken to find whether cats are stronger and faster than tigers. Belonging to the same family, both domestic cats and wild cats have many similarities with a common instinct of hunting. 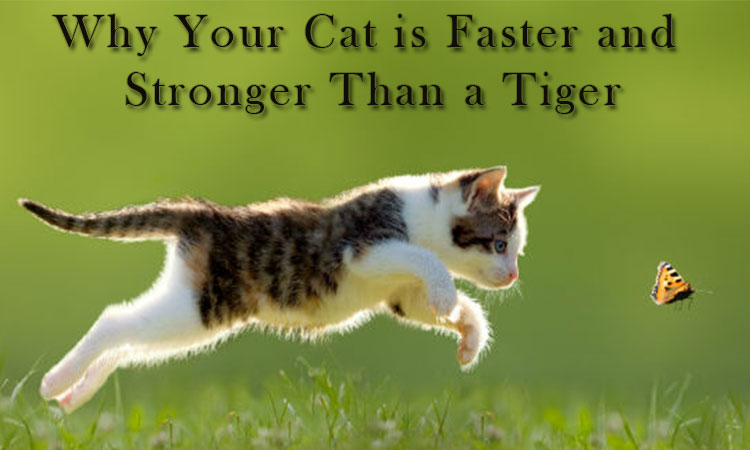 Both cats and tigers belong to Felidae – a name of the biological family. Strictly carnivorous with hunting as their specialty, house cats and large cats still show a wide variation in their skills. You may be surprised to know that though tigers are referred as big cats, the domestic cats are no less than these big hunters are.

The data collected from the GPS trackers and pressure sensors on the roving cats, shows that the timid furry felines are much active in hunt game and participate in some hardcore hunting when on the prowl. They show the same sharp skills and agility that tigers, lions and other large cats show.

The long research on both tigers and domestic cats has brought some amazing facts about the similarities and a much clear picture to discover that how cats are strong stalkers and hunters when compared to tigers.

Similar to tigers, domestic cats rarely straighten their legs while stalking prey, even while running. This quality shows that though they enjoy basking on the couch under soothing rays of sun, they are very much talented to hunt under those dark skies.

Not only that they have that natural instinct to hunt professionally like their bigger brothers but also are far more skillful and show much efficiency in the whole process of hunting. Well, that simply clears out that your cat is stronger and faster than a tiger in his wilderness. Additionally, house cats have extended flexibility to any other large cat, giving them an added advantage over wild cats.

Yet another talent that has been discovered in the study is about their ability to jump five times their height, a skill to catch prey midair and pouch on it directly. Surprisingly, they have unique body structure that helps to cushion them even after a great fall. This ensures that when they leap after some prey, they can recover faster. In proof of this fact, cats have been recorded as walking away from walls as high as 300 feet – as tall as Statue of Liberty.

Within 2 seconds, cats prey their enemies and unleash their greatest talent as hunter. Domestic cats have retained their hunting talent even though most don’t have to as they are fed at scheduled intervals by their owners. Most of them do for fun as they play with their prey before killing it. Thus, they try to satisfy their hunting instinct.

Well, if you are seeing your furry feline having a naptime and lazily blinking those tiny eyes, never underestimate a talented and skilful hunter than her larger cousins in the wild. Your cat is much faster and stronger than her bigger felines.

« Facts about Ebola and Pets
Hypertension in Dogs and Cats – Causes, Diagnosis and Treatment »